Each camp is run by a camp director, assistant camp director, and two program commissioners (three for Camp Sandy Beach), all of which answer to the Reservation Director (currently Jonathan DiLuglio). As there are three distinct camps, each has its own songs, cheers, history, and traditions. With the exception of each camp's waterfront and dining lodge, all program centers are available to campers from all three camps. 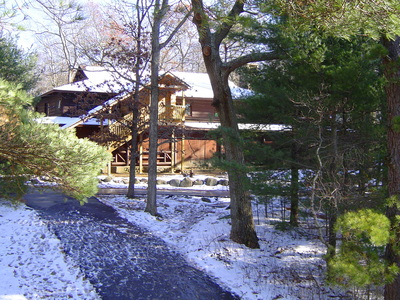 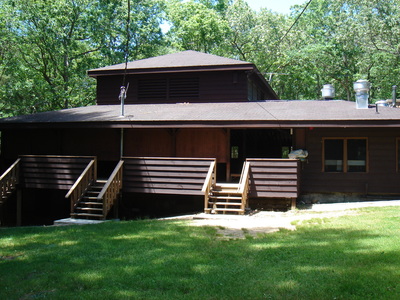 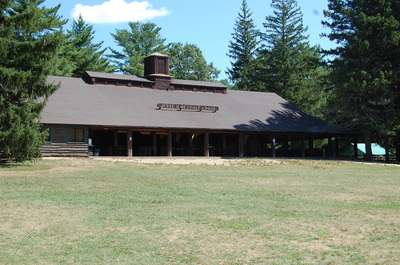 Camp Sandy Beach
Map of Camp Yawgoog
Founded in 1916 as "A Scout Adventureland Forever", Camp Yawgoog is situated on 1800 acres of beautiful wilderness in Rockville, Rhode Island. Yawgoog is divided into three separate Camps: Camp Three Point, Camp Medicine Bow and Camp Sandy Beach. All three camps share reservation program facilities. For example, the Nature Center is located in Camp Three Point, but is available to all Scouts on the Reservation. Each Camp has its own traditions a color, songs and cheers but all three Camps offer the same opportunities to Scouts. The atmosphere of healthy Camp competition is a unique aspect of the Yawgoog experience. Yawgoog Scout Reservation is a part of the Narragansett Council, Boy Scouts of America. The Council is a member of the Rhode Island Association of Camps, and subscribes to its principles of operation. 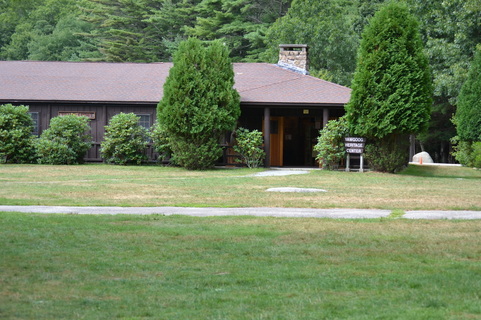 The Rhode Island Boy Scouts (RIBS) was organized, chartered and incorporated in the State of Rhode Island in September, 1910, independently of the Boy Scouts of America.  RIBS held summer camps at various locations in 1911-1915 for its Scout troops.  In 1916, RIBS hired its first executive Donald North and began the search for land to purchase to be a Scout camp.

In 1916, Donald North, after inspecting some twenty ponds in Rhode Island, recommended the deserted Joseph Palmer farm property on Yawgoog Pond as a permanent reservation for Scouting. RIBS purchased the land and opened Camp Yawgoog on June 24, 1916 with Mr. North as its first director.

In 1917, RIBS and the BSA reached an arrangement by which the Greater Providence Council (a predecessor to Narragansett Council) was formed.  This new Council would be chartered by the BSA and would assume responsibility for organization of and support of Scouting units in the geographical area formerly served by RIBS.  RIBS continued as a separate organization that owns camps that is leases to the Narragansett Council in support of Scouting programs.  Beginning in 1918, the Narragansett Council leased Camp Yawgoog from RIBS and the council operates the camp programs—an arrangement that continues to this day.

In 1953, RIBS purchased a controlling interest in the Yawgo Line and Twine Company which included the water rights to Yawgoog Pond, all of the company’s equipment, fourteen mill houses, a store, and approximately 200-acre (1 km2) of unimproved land.

​Yawgoog and Wincheck, according to local tradition, were the names of two Narragansett Native American Chiefs.  Chief Yawgoog serves as the mascot for the camp. He is usually portrayed in a cartoon, shirtless, wearing leather Native American trousers and moccasins, holding a canoe over himself and appears as if he is about to set off canoeing. 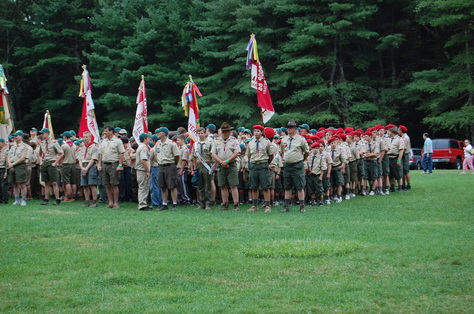 Yawgoog is also responsible for creating the first Totin' Chip program. John Page, nicknamed "Johnny Appleseed," created the program in 1950. Six years later, in 1956, the Apprentice in Training (AIT) program was started in an effort to better train incoming staffmen. The AIT corps, the first of its kind, was later renamed the Counselor-in-Training (CIT) corps and set the standard for subsequent programs across the country. In 2018 the CIT program was again renamed to the Yawgoog Leadership Experience.
The reservation is divided into three distinct camps. Each camp operates independently and has a dining hall, waterfront, and trading post. Originally, however, Yawgoog campers set up tents as part of one centralized camp on what is now Tim O'Neil Field, which is located in Camp Three Point. In 1924, Yawgoog was divided between Upper Camp and Lower Camp, and three camps eventually emerged. Yawgoog is normally active during the summer for eight weeks of operation. During the off season tent camping is allowed at various campsites and cabin camping is allowed in any of the six cabins available. These spaces are available for troops who wish perform outdoor events when summer camp is not in session. The Camp is currently celebrating its 106th season. 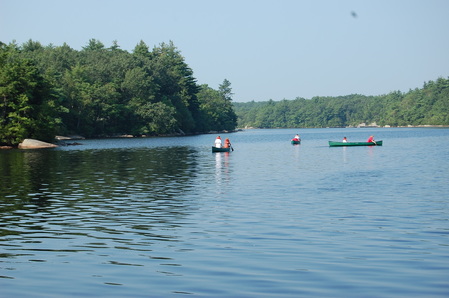 Yawgoog is located in the southwestern corner of Rhode Island—the closest town Hopkinton, RI, which sits at 41.44N -71.79W. The terrain of the reservation is fairly flat, with only one hill (Hill 407) located in the southwestern corner of the reservation. Most of the reservation is forested and consists of deciduous and evergreen trees. On May 4–6, 1930, the camp suffered a forest fire. Much of the forest was destroyed and subsequently replaced with white pines due to their ability to grow quickly. Remnants of the fire are unnoticeable today. There are six main trails that are marked throughout the reservation, and named by colored chevrons (Red, Orange, Yellow, Green, Blue, White) which mark each trail. Trails run through the camps, as well as out through the wilderness to various sights and ponds of the reservation.
The reservation includes three ponds—the main pond is Yawgoog Pond, which serves as the nexus for the three camps for most water and boating activities. To the south, and connected to Yawgoog Pond via a dam and "long cove" is Wincheck Pond. And, to the north of Yawgoog Pond is Hidden Lake (accessible by hiking the "Hidden Lake Trail") found after the forest fire. There is also a trail to nearby Long Pond further south (and downstream from Wincheck). There are several islands on Yawgoog Pond, including Cranberry and Submarine islands in the north corner of the pond, Ant and Schooner Islands which are adjacent to the largest island, named King Phillips Island.